An Open Letter to Alison Saunders

A copy of my Open Letter to the Director of Public Prosecutions, Alison Saunders. 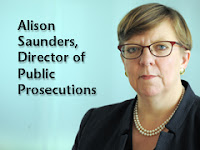 Like many people who have had first-hand experience of our criminal justice system, I was dumbfounded by your recent assertion on the BBC Radio 4 'Today' programme, that no innocent victims are languishing in prison as a result of disclosure failures by the police and/or the Crown Prosecution Service. The statement is as absurd as your predecessor's that 'all complainants of historical sexual abuse will be believed.' How people who secure senior appointments such as the Director of Public Prosecutions (DPP) can make such preposterous statements is beyond me.

Ms Saunders, how could you possibly know that there are no innocent victims suffering as a result of disclosure failures? Pray, tell me, how?

These puerile claims do everyone who is involved in the criminal justice system no credit at all. Anyone who has had a 'taste' of British justice in recent years, particularly in alleged sex abuse cases, knows that the whole system is set up solely to produce convictions at almost any cost. Any defendant will have a mountain to climb to prove his or her innocence. (Let's stop pretending that in alleged sex abuse cases it is innocent until proven guilty).

We all know that once the police arrest someone they feel it is their bounden duty to secure a conviction. We all know that any evidence to cast doubt on the prosecution case will tend to be ignored. Yet, you attempt to whitewash what has become a broken, unbalanced system and this serves to damage your high office as the DPP. Asserting, as you do, that there is no need for the police to review media accounts and mobile phones in such cases is to shut down, potentially, vital avenues of inquiry. This very issue seems to be one of the key reasons prosecution cases are now collapsing on what is virtually a weekly basis. (Full marks to prosecuting counsel Jerry Hayes for getting the ball rolling).

How can you possibly continue to maintain this arrogant fiction that no innocent people are rotting in jail on account of the biased m.o. of the police and/or CPS? The truth is you cannot possibly know unless you order a review of disclosure procedures in every contested prosecution case that has ended in a conviction. After all, juries in criminal trials are under oath to try cases solely on the basis of evidence presented to them during the trial. If crucial evidence which might assist the defence is held back, then such trials can be neither fair nor just. It is no surprise that the recent public collapse of several criminal prosecutions has cast serious doubt in the minds of the general public about the competence - and bona fides - of the entire prosecution system here in the UK.

The CPS, under your leadership, seems to be continuing misguided policies that were introduced for largely ideological reasons. Your unlamented predecessor, Sir Keir Starmer, now a Labour shadow minister, did immense damage to our justice system by politicising the role of the CPS. As DPP, you have rendered a bad situation worse.

British justice used to be the envy of the world, something of which we could all be justifiably proud. Now it is becoming inexorably a national disgrace. Ms Saunders, people's lives are being destroyed due to appallingly one-sided and unbalanced police 'investigations' (try reading my latest book 'Presumed Guilty'; and I was one of the lucky ones!). These 'investigations' presuppose guilt and, what is worse, seem institutionally inclined to conceal or suppress evidence that might undermine prosecutions. In this way they boost the chances of the prosecutors hitting your arbitrary, ideological targets for 'successful' results, i.e. accused people being found guilty.

Ms Saunders, you have spent most of your professional career inside the CPS and it isn't hard to understand why you see no reason to pursue meaningful reform or to challenge the current status quo. Could there be a better reason to consider the ethics of promoting someone from within the system to the post of DPP?

Rather than grandstanding in the media, you might well be advised to look more closely at the reasons public confidence in our criminal justice system is being undermined - an issue highlighted this week by the former Lord Chief Justice, Lord Judge. The law of unintended consequences of the present unbalanced, unfair approach to these 'investigations' might just be that juries will no longer have confidence that they have heard all the relevant evidence and acquit the guilty.

Ms Saunders, we all know that miscarriages of justice are a fact within our legal system. If they were not, then the Court of Appeal would not be quashing convictions. And I can tell you that the chancers/liars/fantasists are rarely hauled into a court of law, even when they are shown to be just what they are. (I am still awaiting for the two liars who falsely accused me to be called to account).

The system is stacked against those accused and the complainants, often referred to as 'victims' from the outset, are supported throughout. For an innocent person, found guilty in a court of law, has little chance of a case review unless there is incontrovertible evidence to prove that innocence. Which makes fair, balanced initial investigations all the more important.

Ms Saunders, there are innocent people rotting in our dangerous prisons. These people are victims, just like those who have been genuinely raped or abused. This latest assertion by you that only the guilty are being punished, are having their lives ruined, gives the impression you are either out of touch with reality or in denial.